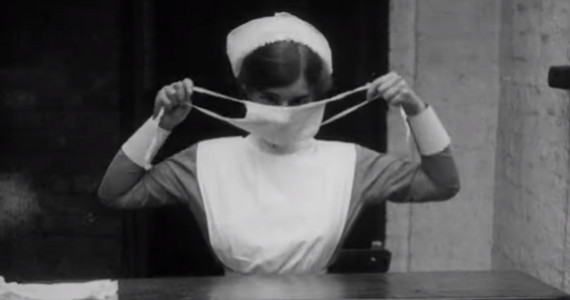 05 Eki DR. WISE ON INFLUENZA: PUBLIC INFORMATION FILMS AND THE ‘FLU EPIDEMIC OF 1918

Posted at 14:48h in English by Beykoz Kundura

“Whilst many persons are railing against the cinema as a disseminator of disease, there is, I am glad to find, one gentleman who is putting theatre to good account as an influenza combatant.”

Previously I reported on some of the debates that the influenza epidemic of 1918 precipitated within the cinema trade. In the struggle between local medical board officers who wanted cinemas closed, and local exhibitors who wanted them open, some quite curious notions about how the disease was spread flew around. Some exhibitors claimed that there was ‘clear evidence that people are more likely to catch infection out of doors than inside places of entertainment’, perhaps drawing on the age old (but erroneous) association of the ‘common cold’ with being cold. Others, following this logic, argued against ‘taking the germ laden air from the streets and pumping it into the theatres.’

Others set great store by the disinfectant qualities of camphor and other strongly scented chemicals.

Reading such reports one might be forgiven for thinking that the mechanism for the spread of influenza-like infections was as yet unknown to medical science. Nowhere are measures such as facemasks, hand-washing or social distancing mentioned. However, it is clear that these measures were well understood, and cinema itself was an instrumental mode by which such precautions were impressed on the public, in the form of the film Dr Wise on Influenza. ‘The “hero” of the film is Dr Wise,’ reported the Birmingham Daily Gazette,

… and during the story he offers a good deal of advice without asking the customary fee. Here are a few specimens:

A person suffering from any kind of cold or fever should stay at home until all the symptoms have abated.

Gargle throat and douche nose with a solution of potassium permanganate and common salt.

It is important to keep fit. Alcohol and public houses increase risk of infection.

The reviewer for The Bioscope found it ‘difficult to repress a shudder’ at the images of flu microbes as seen under a microscope, but reported that like all good public information films, the message was conveyed not only through a lecture, but also through an involving story:

The foolish man who would not nurse his cold was shown. He went to the office, sneezed in the tram, on the train, in the streets, at the office, onto his letters, into his telephone, and indeed everywhere the contagion was likely to spread to others. It did spread. The chief culprit, and several whom he infected, died. Another figure in the story who took precautions when he got cold, soon recovered.

The film’s powers of suggestion were so great, reported the reviewer, that while it was being shown, the auditorium was temporarily full of coughing and sneezing patrons.

Dr Wise on Influenza had been made by Joseph Best B.Sc., who was a long-term advocate of the educational value of cinema. Before the war he had been the manager of Pathé Frères’ educational and scientific department. This was not his first foray into public information filmmaking, having previously been commissioned to make a film called Whatsoever a Man Soweth by the National Council for combating venereal disease. Dr Wise on Influenza was itself commissioned by the Local Government Board (the precursor to the Ministry of Health) and it was distributed by them to local medical officers who then took responsibility for getting it into local cinemas. Considering the tension I’ve already noted between these officers and local exhibitors, one might wonder how widely it was shown. By the end of the war there was considerable resistance among cinema managers to the continued expectation that they would allow screen time for the showing of government information films. Films dealing with venereal disease or dealing with issues deemed by the CEA to be politically partisan were a particular bone of contention and when in the December 1918 election the coalition government sent slides displaying Lloyd George and his ministers out to cinemas, the CEA after much outraged debate absolutely refused to display them. The withdrawal [or suppression] of Maurice Elvey’s The Life of David Lloyd George (1918) can also be understood in this context. A few years later in 1920 an interesting debate arose in the Leeds and District CEA branch meeting when the local medical officer asked if exhibitors would be prepared to display a single slide in support of ‘Child Welfare Week’. A refusal was their instinctive reaction. During the ensuing debate a supporter of the scheme pointed out that the slide was a compromise after a previous request for them to show a short film had similarly been refused. The medical officer, it was reported, ‘held pronounced views as to the utility of the cinema with regard to the propaganda of health matters.’ The speaker reminded the branch that during the influenza epidemic they had fought against the closure of the cinemas precisely by arguing that a better course of action would be to make use of their facilities by showing public information films advising on how best to avoid infection – so the refusal of the present request looked very like hypocrisy. This argument was met with a dusty answer, and further rehearsal of various grumbles about the ‘ridiculous’ 1918 restrictions.

It seems advocates of public information cinema such a Joseph Best were faced with an uphill struggle. Nevertheless I’ve found reports of Dr Wise on Influenza being distributed (as ‘the official influenza film’) in Birmingham, Cambridge, Sheffield, Newcastle, Bradford and Whitby. The account from Whitby singles out the section on how to fashion a mask from a handkerchief for particular praise, arguing that ‘the value of this precaution is illustrated by the experiences of San Fransisco, where it is stated that the universal wearing of masks for 9 days has stopped the outbreak of influenza.’

Further advances were to come. When the Local Government Board was transformed into the new Ministry of Health in June 1919, it had as its minister a great advocate of cinema health education in the Right Hon. Christopher Addison.[12] In fact, looking back at his time as the first minister for Health, Addison singled out an influenza film as one of his greatest successes. Unfortunately it wasn’t Dr Wise, but another shorter film. “I have seen several health films which have suffered from being too long and too dull” opined Addison,

At the time of the influenza epidemic in 1920 I arranged with a well known firm of producers to make a film showing girls gargling at school. This film lasted 90 seconds. It cost £30 to make – an expense borne by the distributors. It was shown within a week to 30 million people, thus suggesting to the public one of the methods for the prevention of influenza without any cost to the Treasury. Such utilisation of the kinema, if directed by ‘live’ men in Whitehall, could accomplish much.

Dr Wise on Influenza is, I think, an excellent public information film – it gets its message across not just through the didactic pronouncements of Dr Wise, but also (as the Bioscope noted) by means of a realistic and well-acted illustrative drama. Much of the charm of these dramatic sections of the film for a modern audience must come from the glimpses they afford of London’s wartime West End. There are location shots in Trafalgar Square and Leicester Square and around the theatres and cinemas nearby. It is quite clear from the internal evidence of these shots that the film crew (perhaps for budgetary reasons) simply went out into the crowded streets and filmed where they could. There is barely a passer-by who enters the frame and doesn’t glance with curiosity at the action, or at the camera. Some gingerly back out of the shot when they realise what is going on, some linger in fascination, while others boldly face the camera, usurping (albeit briefly) the focus of the scene from its intended protagonists.

I’ve written before about films in which the bystanders either boldly and purposefully hijack the screen, or by their unobtrusive presence offer a critical commentary on the action for a modern audience. This is unlike those in that it is a drama rather than an actuality – evidently nobody has signalled that filming is going on, and so you can see people turning a corner unawares, registering that there is a camera and crew present, and changing their behaviour accordingly. I particularly like the scene where Brown emerges from his house, sneezing away. A youth in a bowler hat passes, and completely absorbed in watching the actor perform, does a 360 degree turn before he notices the camera. He lingers, and moves back across the frame behind the actor gazing at the camera the whole while.

In the scene that follows (shot in Trafalgar Square) a well-to-do lady in a hat turns to watch the action and take in the camera, and later a man enters frame left, realises he’s in shot, and rapidly backs out again. Later when Brown is outside a restaurant and ‘grill room’ (is it the Criterion?) a woman walks into the shot from behind the camera and quite deliberately turns to look into the lens, laughing with her companion. The actor has to actually shove past her to retain control of the scene, while in the background the doorman and other passers-by look on.

In the shot immediately following, three men in uniform are seen, but soon vanish to be replaced by a man and a woman turning a corner. On observing the filming the man grins mischievously at the camera and takes ‘his place in the queue’ for the restaurant, evidently determined to be in the film whatever the feelings of his lady companion. These scenes are quick enough for such behaviours to pass unnoticed by viewers intent on reading the image for cues to the primary narrative. But repeated viewing offers a curiously intimate glimpse into the unselfconscious street life of 1918.

NB The embedded version here and the screen shots are from Tony Fletcher’s brilliant Celluloid Tapestry Youtube channel. Tony’s transfer plays the film at 16fps and can be viewed internationally. You can also view the film on the BFI Player (only available in the UK), where it is transferred at 12fps. Many film projectors were still cranked by hand during this period, so projection speeds would have varied from screening to screening.