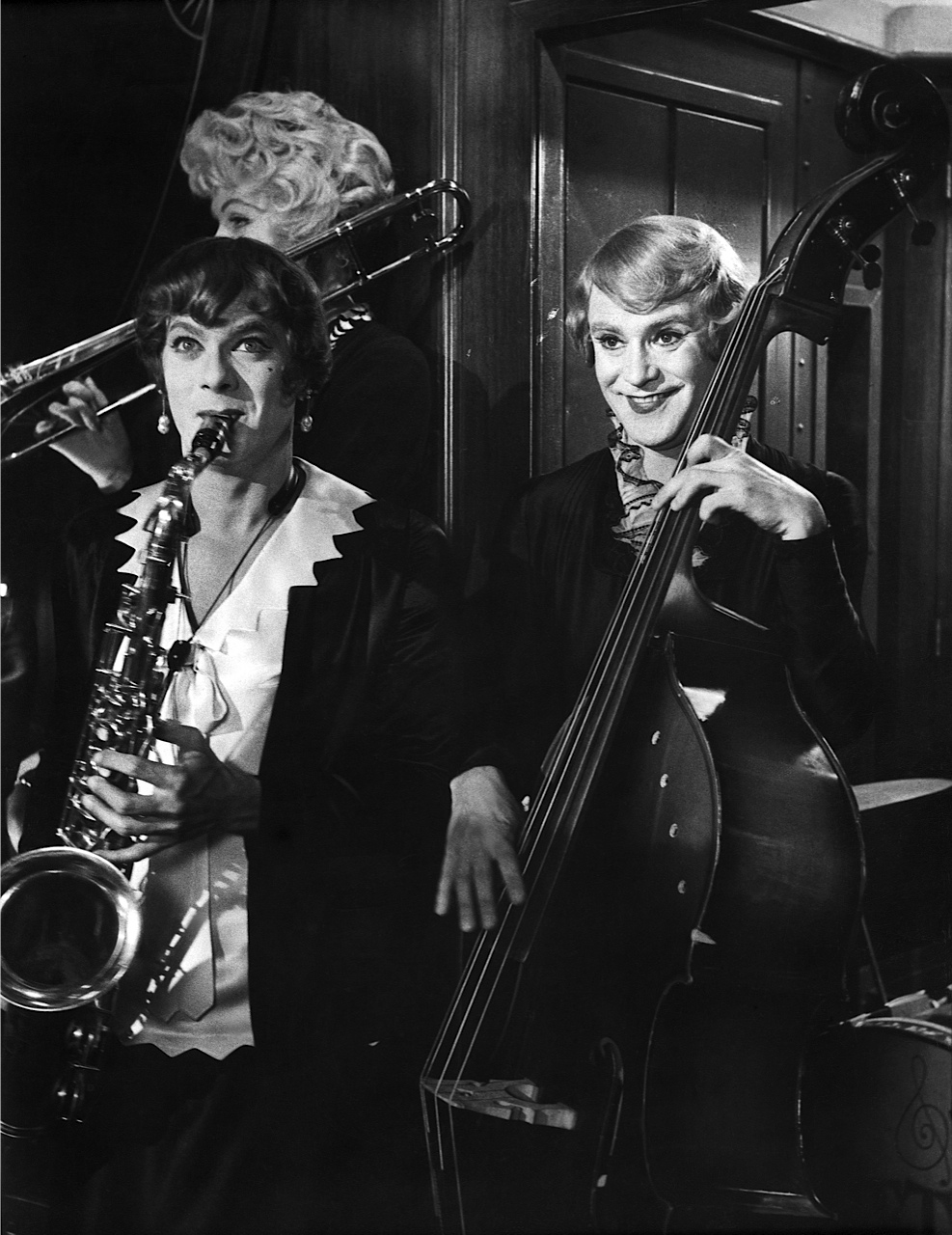 Posted at 14:45h in English by Beykoz Kundura

In 1958, Tony Curtis was at a Hollywood party when Billy Wilder took him aside. Wilder was planning a film about two musicians who dress up as women to join an all-girl band, and he asked Curtis to play one of the musicians. Curtis was overjoyed, but he wasn’t sure why such an illustrious writer-director would want to use him. “You’re the handsomest kid in this town,” said Wilder. “Who else am I going to use?”

Faced with the question of why Some Like It Hot has topped BBC Culture’s poll of the best ever big-screen comedies, it’s tempting to say something similar. Wilder’s glittering masterpiece doesn’t just use the handsomest kid in town (and a terrific actor, to boot), but its most radiant sex symbol, Marilyn Monroe, and one of its most dexterous comedians, Jack Lemmon. It also has a bevy of bathing beauties, a crowd of sinister mafiosi, a glamorous seaside setting in the roaring ‘20s, and a sizzling selection of songs.

It is structured so meticulously that it glides from moment to moment with the elegance of an Olympic figure skater, and the consummate screwball dialogue, by Wilder and IAL Diamond, is so polished that every line includes either a joke, a double meaning, or an allusion to a line elsewhere in the film. To quote one character, it’s a riot of “spills, thrills, laughs and games”. To quote another, it deserves to be “the biggest thing since the Graf Zeppelin”. So why was it chosen as the best comedy ever made? Simple. What else were we going to choose? 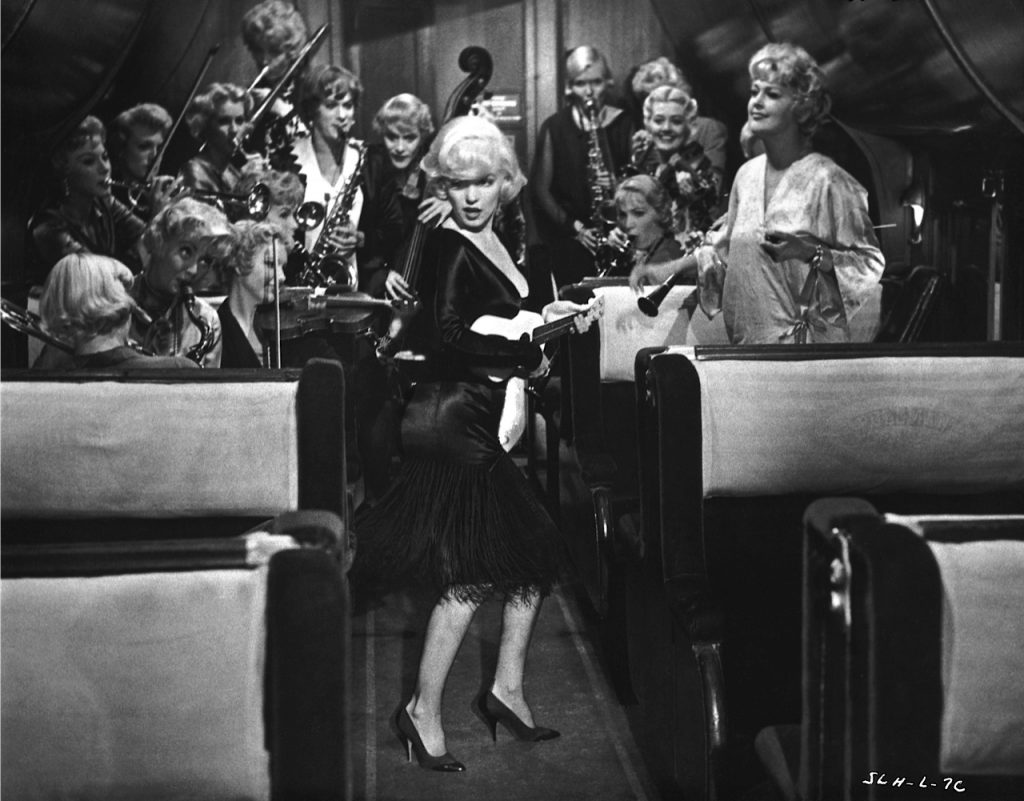 There’s more to Some Like It Hot than its sparkling surface, though. As well as being a romantic comedy, a buddy movie, a crime caper, and a musical, the film is an anthem in praise of tolerance, acceptance, and the possibility of transformation. It’s an anthem that we need to hear now more than ever.

Wilder borrowed the basic set-up from a French farce, Fanfare d’amour (1935), and a remake, Fanfaren der Liebe (1951), which he dismissed as “a very low-budget, very third-class German picture”. Its heroes are Joe (Curtis) and Jerry (Lemmon), a saxophonist and a bassist who are scraping a living in freezing Chicago when they witness 1929’s St Valentine’s Day Massacre – or a version of that legendary event at least.

Desperate to elude the city’s most ruthless gangster, Spats Colombo (George Raft), they disguise themselves as Josephine and Daphne (“I’ve never liked the name Geraldine,” explains Jerry), so that they can hide in a Florida hotel for three weeks with a female jazz orchestra, Sweet Sue’s Society Syncopators. On the southbound sleeper train, they are both smitten by the band’s voluptuous ukulele player, Sugar Kane (Monroe). She tells Joe/Josephine that she is hoping to seduce a millionaire in Florida, so when the band arrives at the Seminole-Ritz Hotel (actually the Hotel del Coronado in San Diego), he switches to another disguise. Stealing some clothes from the band’s manager, and stealing his accent from Cary Grant, he styles himself as Junior, heir to the Shell Oil fortune. 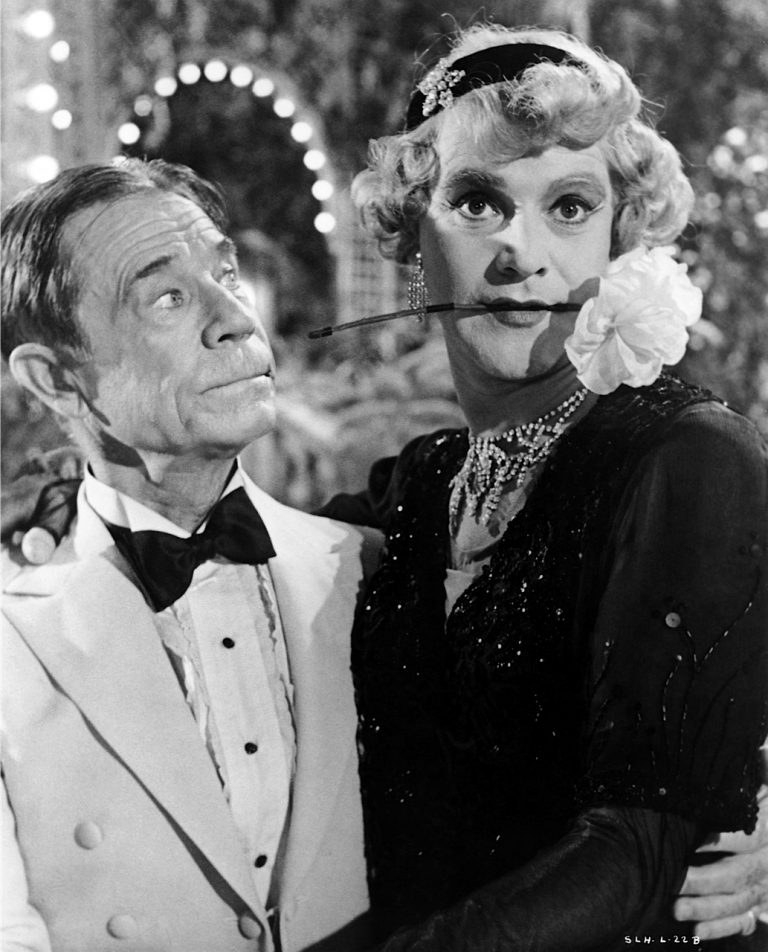 One of the film’s many twists is that when Sugar meets Junior on the beach, he doesn’t throw himself at her. He plays hard to get. Sugar tells him that her band specialises in hot jazz, but he sniffs, “Well, I guess some like it hot. But personally, I prefer classical music.” Sugar doesn’t miss a beat. She claims to have “spent three years at the Sheboygan Conservatory of Music” – a claim she overheard Joe/Josephine making the previous night. “Good school,” murmurs Joe/Junior. Sugar, he realises, is just as adept at lying as he is.

Meanwhile, Jerry/Daphne has been inveigled into going out with an elderly – and presumably short-sighted – tycoon, Osgood (Joe E Brown), and their enchanted evening ends with another twist: in the morning, an elated Jerry tells Joe that he and Osgood are engaged. Joe protests that there are “laws, conventions” that have to be observed. But when Jerry finally admits to his fiancé that he is a man, Osgood responds with the film’s exemplary last line, “Well, nobody’s perfect.”

In summary, Some Like It Hot is the story of people who lie and cheat in order to con other people into bed or out of their cash. Wilder has a reputation for dark, cynical films (see also Sunset Boulevard and Double Indemnity), and Some Like It Hot could be categorised as one of them. But it has so much warmth that it carries the viewer upwards like a hot-air balloon. Rather than condemning its unscrupulous anti-heroes, it respects them and sympathises with them in a way which must have seemed radical in 1959, and which seems more radical nearly six decades later.

Just imagine how the film’s scenario would be treated in a Hollywood comedy today. Joe and Jerry would be punished for their deceit. Sugar would have to catch Joe out, and he would have to apologise, and the viewer would have to sit through a montage of their shared misery before she forgave him. He and Jerry would then use their talent for duplicity to extract a confession from Spats Colombo. And, of course, Jerry and Osgood’s heterosexuality would be vigorously reaffirmed. Think of Judd Apatow’s comedies, for example. They all conclude that it’s amusing for “laws, conventions” to be flouted for a while, just as long as they’re put firmly back in place before the end credits roll.

Some Like It Hot is too buoyant to be brought down to earth by such prissiness. When Sugar learns that Joe has been tricking her, she runs straight into his arms. When Osgood learns that Jerry has been tricking him, he doesn’t bat an eyelid. The message is that there is nothing wrong with faking it until you make it. Experimenting with a new identity can help you become a better, happier person. It can help you survive. And, if you’re lucky, you’ll find someone who accepts you for whomever you want to be – perfect or otherwise.

It’s a boldly inclusive message, but it’s one that must have been close to the film-makers’ hearts. After all, several of them had reinvented themselves, just as the characters do: emigrating from Germany (in Wilder’s case) and Romania (in Diamond’s), distancing themselves from their hardscrabble pasts in Californian foster homes (in Monroe’s case) and on the streets of the Bronx (in Curtis’s). For a frantic farce about two cross-dressers on the run from prohibition-era mobsters, Some Like It Hot is a strikingly personal, even semi-autobiographical film.

Look again at the beach scene with Joe and Sugar. It was written by two men who were once called Samuel Wilder and Itec Domnici, and acted by a man and a woman who were once called Bernie Schwartz and Norma Jeane Mortenson. Schwartz, who renamed himself Tony Curtis, is playing Joe, who is pretending to be Junior, using the mid-Atlantic vowels of Cary Grant, who was once called Archibald Leach. Mortenson, who renamed herself Marilyn Monroe, is playing Sugar Kowalczyk, who renamed herself Sugar Kane, and who is using lines which Joe used when he was pretending to be Josephine. Not even Twelfth Night or The Importance of Being Earnest had such elaborate fun with its characters’ identities. Names, genders, social standings … they can all change in Some Like It Hot. It’s the American way.

In Curtis’s memoir about the making of the film, he confirms that Wilder and Diamond embedded this theme in its title. People, he argues, can be as fluid as the pop songs of the 1920s, which were performed in different styles – either “sweet” or “hot” – according to the audience’s preference. “The concept was important to our movie,” writes Curtis. “A person can be more than one thing, depending on the time, the place, whatever. Sweet or hot.”